This was a Retrofit Project successfully commissioned in desired timelines with performance above expectations. With our suggested solution; Customer could improve productivity of workers, save space which they are now using for storage and the same is achieved with savings in power consumption. Over and above with our solutions they could retain existing system and could install new one in the budgeted cost of shifting of existing system.

Customer approached us with their requirement of shifting of existing water cooled chiller plant to terrace level at BA10 Gear Box Assembly section at Mahindra & Mahindra Limited, Kandivali plant. BA10 Gear Box Assembly department was a critical area and customer was facing following issues due to ineffective air-conditioning.
• Old AHU which was not performing to its efficiency.
• Frequent failures
• Ineffective Air Distribution resulting into worker’s unhappiness and complaints.
• It was affecting productivity of the department.
• The existing plant was occupying a plant room and also terrace level where Cooling Tower was located.
• Customer wanted to use the plant room as a new storage area as per their management’s decision.
• They decided to shift existing system to terrace level.
• System was consuming heavy power.

We did site survey and submitted our offer as per customer’s requirement (i.e. for shifting of existing system) which was more than budgeted cost of customer. We also studied and suggested different solution with feasibility of installation & with energy saving calculations over existing system. Customer accepted the same after technically evaluating the proposal by their technical team. We were given a task of completion of dismantling & re-installation of new system with shut down of only 8 days. We took it as a challenge and completed the work within planned schedule and commissioned the system with performance beyond expectations. 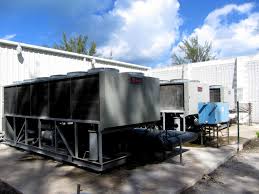 • Customer could improve on productivity of people,
• They could save space which they are now using for storage
• This is also achieved with savings in power consumption.
• Over and above with our solutions they could retain existing system for some other application and could install new one in the budgeted cost of shifting of existing system.